It was not until the installation of the 3rd Republic that Meudon regained its role (this time permanently) as an aerospace center. In 1877

the upper plateau Campus, including the little that was left of the Chateau Neuf, was allocated to the astronomy community under the leadership of Jules Janssen, while the lower valley Campus bordering on the Etang de Chalais was allocated to a new generation of aeronauts under the leadership of Charles Renard, whose mission was to set up an establishment for the development of aircraft that would not merely drift downwind (unless tethered, like Entreprenant during military service) but that would be able to reach a chosen destination, and, in particular, to get home.

for use as the foundation for the construction - specially for planetary observations - of what was to be (and still is) the largest refracting telescope in Europe, Captain Renard was busy with the more rapid erection of the gargantuan shed known as Hangar Y, whose purpose was to house a new 50m long airship called La France.

The new airship was fitted out, for the first time, with effectively operational spinning wheel machinery of the appropriate kind, consisting of an electrically powered screw propellor developed by the military engineer Arthur Krebs. 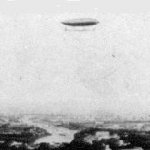 The result would have been particularly appreciated by Janssen who (though crippled as far as ordinary walking was concerned) was an experienced balloonist in his own right. He may not yet have realised that he would have his own place in aeronautical history for his observation, during an eclipse of the sun in 1868, of the spectral lines of a hitherto unknown element, since called helium, that was later identified as the lightest of the inert gases, and that was therefore destined to replace Cavendish’s inflamable hydrogen in modern airships. As shown in the accompanying photo, Janssen and the other astronomers had a grandstand view when their aeronautical colleagues triumphantly demonstrated the first practical solution of the Flying Dutchman problem in several memorable flights (at speeds up to 20 Km/h) in the sky above our Observatory in the autumn of 1884. After each flight - and this what was what had not been possible before - the airship was able to return safely under full control to its home base, the still remarkably well preserved Hangar Y, in the sheltered valley below.

Further improvements of the spinning wheel propulsion machinery - most notably by the introduction of the internal combustion engine - enabled the use of purely aerodynamical (rather than aerostatic) lift at the beginning of the XXth century, which entailed the requirement of a long landing strip. This

lead to the transfer of actual flighing activities to other bases (such as Villacoublay on the plateau nearby). Nevertheless Meudon’s Chalais valley establishment continued to be developped as a technological research centre, with the focus of interest transferred from Hangar Y to the (by the standards of the time) gargantuan wind tunnel that was constructed after the overwhelming importance of air power had been definitively demonstrated during the First World War. The Meudon aviation research base has since become a unit of the Office National d’Etudes et de Recherches Aérospatiales, which now operates modern supersonic wind tunnels there.

While these developments were going on in the valley below, the Observatory on the plateau above evolved by stages towards its present

configuration - first as a separate organisation, and since 1926 as part of a united Observatoire de Paris, with headquarters in the historic downtown campus established (opposite the Luxembourg Palace) by Louis XIV for the astronomer Jean Dominique Cassini. The most spectacular step (shortly after the construction of the Eiffel Tower in 1889) was the completion of the giant (83 cm aperture) refracting telescope known as the Grande Lunette in the prominent domed turret at the center of the partially reconstructed Chateau Neuf, whose silhouette was thereby restored to something more like what it had been at the time of the Grotte. Whereas the more commonly employed mirror technology is preferred for faint sources such as distant galaxies, a refracting telescope is advantageous for sources such as planets, for which the main problem is to achieve sufficiently high resolution.

Grande Coupole, Tour Solaire, and Laboratoire d’Astrophysique de Meudon, alternating with opposite view towards Paris, showing the murk that motivated the move to Meudon

As Janssen’s main professional concern had been not with galaxies or planets but with the Sun, it was logical that Meudon should develop as the most important European centre for Solar astronomy, a field that has special technical problems of its own. It was for this purpose that the last important step in the achievement of the present layout of the Campus was completed in 1969, by the construction of the conspicuous mushroom shaped Tour Solaire, which is designed to bypass the air turbulence that develops near the ground on sunny days, while at the same time the development of theoretical, as well as observational, work was facilitated by the construction of the Laboratoire d’Astrophysique de Meudon under the guiding influence of Evry Schatzman, a pioneer of the theory of the (transparent but extremely hot) Solar corona.

The problem of getting past turbulent or simply absorbent layers of the atmosphere has always been a major problem of astronomers, and has lead to the construction of telescopes of various kinds in successively higher mountain sites, and to the continued use of balloon supported instrumentation, as in the record breaking aerostatic ascent from Meudon, for the purpose of observing Mars, by the astronomer Audouin Dollfus in 1959.

The most recent progress in getting past the astmosphere has of course, been by the use of satellites and other space probes. For this reason, the ground based observational equipment in a historic Observatory such as that of Cassini, and even that of Meudon, is no longer as important as it used to be.

Nevertheless (in partnership with other institutions such as the University of Paris VII) the Observatoire de Paris, and particularly its Meudon Campus, remains at the forefront of new developments, notably as a base for the development of space launched instrumentation for modern detectors, which are no longer restricted to visible light, but are susceptable to infra red, X-rays, and much more. Since the pionneering initiative of Schatzman, the Meudon Campus has also become a center for the development of theoretical astrophysics, particularly in the recently established LUTH, which is concerned not just with phenomena that are directly observable, but also with what goes on out of sight, as for example in the central regions of ordinary stars (such as the Sun) and of more exotic objects such as neutron stars and particularly in the black holes that are thought to account for spectacular but still mysterious phenomena such as quasars.